What is Sketchy Maze?

It is a “drawing-based maze game” themed around hand-drawn maps on paper. It’s one part ‘yet another 2D platformer game’, one part ‘Mario Maker but you can make whatever you want’, and part educational game in that it might help teach someone to code so they can program their own custom doodads to use with their levels.

With Sketchy Maze, you may draw your own levels and then play them as a side-scrolling platformer game. You may draw maps freehand or with some basic drawing tools (like rectangles and ellipses), specify which color lines are “solid” and which behave like “fire” or “water,” and then drag and drop various “doodads” such as buttons and doors onto your map to add some interactive elements.

If you’re not much of a level designer, fear not! The game will also feature some built-in levels that you can play and get some inspiration from. You will also be able to play custom maps created by others, which may come with their own custom doodads attached (details).

What devices can I play it on?

Sketchy Maze is first and foremost a videogame for desktop operating systems. It should run on any GNU/Linux, Microsoft Windows or Apple macOS computer. It also happens to run on Linux smartphones and is mostly playable at screen resolutions as narrow as 375x750.

I currently package releases of the game for:

Some places I could see it going in the future:

Doodads are the dynamic objects you drag and drop into your level to make it “do” things. They are the Buttons, Switches, Trapdoors, and other traps and hazards to create puzzles and perilous platforming sections of your level.

The game ships with a handful of built-in doodads and players may also create their own, and program their behavior using JavaScript.

Do I need to learn how to program?

Nope! You can just draw some levels and use pre-made doodads in them. The “1.0” version of the game is expected to include a proper set of single player levels that can simply be played so you don’t even need to draw your own level if you’re not feeling creative.

You can also create some useful custom doodads in-game by selecting from a “generic script” to drive its behavior. For example, you could draw a “spikes” doodad and choose the “Generic Fire” script and it will act as a hazard to the player in-game: “Watch out for spikes!”

How do I program a custom doodad?

There are some full example doodads that you can learn from for creating your own custom Warp Doors or playable characters similar to the ones the game ships with.

You may also peek at the game’s built-in doodad sources to see how they’re programmed if you want to make something similar.

You may also pick from a built-in generic script for your doodad, and then download the script out of your doodad to use as a starting place to customize it.

See the Doodad Scripts documentation that came in the game’s Guidebook and the full JavaScript reference for more information.

The user interface is ugly!

I find the “Windows 95” look charming.

Along with this game I’m also developing my own user interface toolkit from scratch, with a simple API inspired by the Tk toolkit. It happens that the “Windows 95” look is easy to draw programmatically, as a button is just a few rectangles overlapped to draw shadows and highlights.

The user interface toolkit is released as a free and open source module that other Go developers can use to draw buttons, menus and other UI controls into a graphical application. One day, the UI toolkit will support fancy theming of widgets, and Sketchy Maze will very easily look better (or have user-configurable themes available to choose from).

Why does my launcher icon have an orange logo? 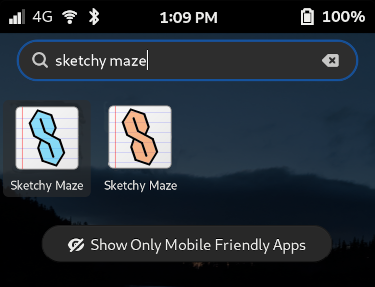 Since version 0.13.0, Flatpak builds for Linux are now using an orange version of the launcher icon. This is mostly because I install both the Flatpak and the native (rpm/deb) package simultaneously and it was hard to tell which version is which!

While the game is still in beta, it’s bound to have some bugs. Tell me about any you find at support@sketchymaze.com.

Some current known issues and work-arounds are as follows:

If you draw onto your level while zoomed in or out, the pixels that get committed to the level may be offset from where the preview was on-screen. Draw some test lines to find out the offset or else avoid drawing while zoomed. The 1 (one) key restores the zoom level to default 100%.

Is this game free?

While the game is in beta, all releases are 100% free and fully functional.

After the game reaches “1.0” it will have a free version and a paid one which unlocks additional modding capabilities, like the ability to embed custom doodads in your levels. I like Minecraft’s model of “buy the game once, free updates forever” and will do similar.

The full version would mainly add quality-of-life improvements supporting custom user content, such as the ability to play a custom level which comes with all of its custom doodads, wallpaper, and other assets embedded directly inside the level file.

The free versions of the game would include:

Paid versions of the game will include additional features such as:

It is expected that the full set of built-in doodads will be equally available in free versions of the game. And these doodads should be varied and featureful enough to create all sorts of custom and creative levels, which can be shared with other players.

Will the game feature any form of Digital Rights Management (DRM)?

Likely, the same program .exe will use “free version” features by default until registered as a paid version, with any of these options:

But the plan is that the “license key file for offline activation” always be available. You get a proof file that you can keep forever and any version of the game that accepted it before will always do so. That way even if I got hit by a bus or you lost your Steam account, the game can still be played to its full potential.

When I start to discover license keys which have leaked online to game piracy websites, future releases of Sketchy Maze will begin to include license revocation lists and will cease honoring the compromised license key.

If the game gets online services in the future (e.g. for seamless in-game sharing of custom levels and doodads), players would need a valid signed license key to log on and these leaked keys would be excluded.

While in beta, this game is sort of evolving as it goes and some features added later may break or affect custom levels created today. As a general rule of thumb: the game’s built-in levels are expected to mostly keep working as the game is developed further as I don’t want to create too much more work for myself revisiting old levels to fix them up.

Here are a few current quirks in the game and how they’re going to be handled in the future:

Currently, fire pixels only kill the player character but enemy mobs can walk through them unscathed.

Eventually, fire pixels will be able to destroy enemy mobs and the mobs will try and avoid walking into fire but if they fall into it on accident they’ll be destroyed.

Planned feature: a “Fireproof Mobs” Game Rule, so existing maps that have lava pits and dumb mobs (like Azulian Tag, where the Azulians chase the player to Hell and back) will be able to gain backwards compatibility by toggling a game rule on.

The platforming physics and player controls may be tweaked still but generally the player’s jump height and reach will be kept close to its current state. Use the built-in levels for inspiration.

The game may eventually have multiplayer features where you can design a map meant to be played by two or more players. Doodad Script functions such as Actors.FindPlayer() will operate on the nearest player character and try and maintain backwards compatibility for maps made today.

What is this game built with?

Sketchy Maze runs on a custom game engine, built from the ground up, in the Go programming language and using SDL2 for graphics, sound, gamepad and other basic features via the veandco/go-sdl2 bindings for Go.

While the game itself is not open source (yet), some of its critical components are released as free and open source projects that other developers can use in their projects.

Is this game open source?

Parts of it are!

Sketchy Maze was built from the ground up using little more than SDL2 which lets you plot pixels on a screen. While I was designing the game, I thought it’d be a good idea to write an abstraction layer between low-level SDL2 functions and give me a clean, Go-like API to work with that keeps my code from either depending too much on SDL or for my Go code to be written too much like C to work with its raw API.

So I built my own render library that abstracts around SDL2 for desktops (and HTML Canvas elements for WebAssembly), and my game needed UI buttons so I wrote a UI toolkit which provides Labels, Buttons, Menus, Windows, and all sorts of useful widgets to draw my user interface with. The render engine can be extended to target other APIs in the future, such as OpenGL or Vulkan, as needs arise.

Here are a list of open source projects released as a part of development of Sketchy Maze which should be generally useful to any Go developers for making some simple graphical applications.

GitHub mirrors of the above:

Also this website, the user guidebook, and other things with the game are readable as open source code, at https://code.sketchymaze.com/

Wait, does Sketchy Maze have a WebAssembly port?

Sure does! But performance isn’t great yet, and I’m not sure whether WebAssembly support in web browsers needs to get better or if I need to tighten up my code. There is a lot of room for optimization in my UI toolkit, to minimize the number of draw calls per tick.

One day I might have a “demo this game right in your web browser” feature with a (probably stripped-down) version of the game built for WebAssembly. So far, though, it just freezes web browsers frequently and I’m not letting you see it yet.

Is it coming to Android or iOS?

An Android app is the most likely one of these, but it may be a while out (after the “1.0” release). The game is primarily meant for desktop-sized displays, but it also runs as-is on GNU/Linux smartphones like the Pinephone, so I am testing the game on that to make sure it mostly works on that size of screen, if only a bit awkwardly.

I have some resources on how I might compile my game as an Android app, but I haven’t found any info on how one compiles a Go SDL2 app for iOS; and I don’t own any of the hardware needed to develop for iOS anyway.